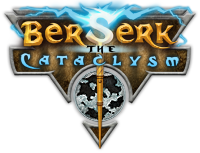 Welcome to the Berserk: The Cataclysm WikiEdit

Berserk: The Cataclysm is a free-to-play, strategy collectible card game set in a fantasy world.

The world of Laar, a once prosperous land that is now covered in ashes after a cataclysm caused by powerful magic. The darkness whelmed its lands and birthed terrible beasts and monsters. Trying to protect themselves from the dark creatures, the mightiest wizards established the flying islands, rising parts of land in the sky. Now they are battling with each other for resources and living space.

Players enter this world as a powerful wizard and master of their own sky-island castle. They battle to expand their dominion and conquer new islands. There are several battlefields - defeating barbarians or other players to protect the dominion, seizing other players' lands, and competing with friends. Players can customize their towers with interior items and war trophies, invite friends to demonstrate the achievements.

To fight, players can hire creatures of five elements – Forest, Mountains, Great Plains, Swamp and Eternal Darkness. There are also Neutrals, who do not belong to any particular element. Each element gives its warriors special powers, which creates diverse, intense and unpredictable gameplay.

• Global strategy elements - conquer other players’ lands , construct an island from their conquered pieces and protect allies from enemies.

• Asynchronous PvP: players battle even when one is away from the game.

In this wiki you can find the following sections:

6.1 Conquest of the land

Retrieved from "https://btc.fandom.com/wiki/Berserk:_The_Cataclysm_Wiki?oldid=5025"
Community content is available under CC-BY-SA unless otherwise noted.